They’re called trees, and they have 350 million years experience looking after our planet. Luckily, when modern cities started to form someone had the clever idea of planting trees there too, so we could enjoy the benefits they bring even in our urban communities.

And our urban trees are pretty amazing. Not only do they provide a source of beauty and interest in the otherwise bleak urban landscape, they have crucial environmental benefits and give all us city-dwellers a place to relax, away from the stresses and strains of everyday life.

But our urban trees have come under increased threat in recent decades and we are now at risk of losing the lungs of our towns and cities. With 80% of us now living in urban areas, we now need our trees more than ever.

1. They produce Oxygen (no big deal)

It has been said that if trees produced free WiFi, we would be planting them in our cities like crazy. What they do produce is Oxygen, an element which is fundamental to our existence on this planet!

In a single season, 1 mature leafy tree can produce enough Oxygen to allow 10 of us to breathe. This is most important of all in densely populated and polluted areas like cities, where average Oxygen levels are expected to be at least 6% lower.

2. Carbon and Carbon Dioxide, storing it and soaking it up

Trees play an important role as what we call, carbon sinks. This is the storing of carbon as part of the carbon cycle and is an important part of helping to mitigate the effects of climate change.

In a year, a single mature tree can absorb up to 48 pounds of carbon dioxide. It’s thought that globally our forests absorb 40% of manmade CO2 emissions before it reaches our outer atmosphere where it can trap more heat. Because of their size and density, trees are much better at this than smaller plants.

To give you an idea of just how good they are at storing carbon – it’s estimated that 2,367,000 tonnes of carbon is stored in London’s trees alone, with an estimated value of £147million to the UKs economy.

3. They clean our air

It isn’t just Carbon Dioxide that trees absorb from the air, the also soak up a range of other pollutants and toxins which are emitted by our everyday activities. This is more vital than ever these days, as air pollution – particularly in urban areas – means the air we breathe is reaching (or exceeding) toxic levels. Not great when 8 in 10 of us now live in built up towns and cities.

While all trees do this, the most successful ones are ones that are suited to their location, so require little management or trees that have long lives and are fairly disease resistant.

4. Protecting us from flooding

A single mature, leafy tree can absorb up to 450 litres of water through its roots every day, as well as capturing rain water on the surface of its leaves. Their roots also reduce soil erosion in the ground and slow the filtration of water into our cities drainage networks.

This is particularly important in cities where a large proportion of the grounds surface is made up of impermeable materials, like tarmac and concrete. When we get a sudden downpour, this can quickly cause flash flooding if the water has nowhere to go. Trees to the rescue!

As well as absorbing water, trees also release it as water vapour through evapotranspiration from their leaves, which produces a cooling effect. They also provide shade for the ground and buildings, resulting in further cooling and less energy usage. The overall cooling effect of a single, mature tree an average is equivalent to 10 air conditioning units running for 20 hours in a day. This cooling helps against the urban heat island effect which can cause temperatures in a city to be 7 degrees higher on average.

6. A helping hand for wildlife

Important species in their own right, trees also provide a source of food and habitat to a plethora of other species in our urban environments – Bats, birds, badgers, insect, other plants, fungi and mosses, this list is almost endless!

7. They’re good for our mental health and wellbeing

It’s not all about the physical environment; trees also help us with our ability to cope mentally with life in an artificial urban environment.

Being around nature, specifically trees, has been shown to reduce the levels of cortisol in our brains. This is otherwise known as the stress hormone, and lowering it can help to reduce the symptoms of anxiety and stress. We are also more likely to leave our homes, go outside and exercise if there are lovely, welcoming trees and green spaces.

8. Our urban trees are getting old

Most of the trees we see in our cities today are here thanks to our revolutionary ancestors who planted them as long as 100 years ago for us to enjoy today. But these are trees are now reaching now coming to the end of their life cycles and reaching old age.

The problem we face now is that it takes a long time for a tree to reach maturity, where it is bringing its maximum level of benefits to us. So if we don’t increase the levels of tree planting soon, we may have a long wait until we have more iconic, beautiful trees to replace the aging tree population.

9. Everyone’s heading to the cities

Urban sprawl is taking over. Eighty percent of us are now living in urbanised environments and there are no signs of this slowing down. It is projected that the increase in urbanisation along with expected overall global population growth, there could be another 2.5 billion people in urban populations by the year 2050.

10. Because we love them

Trees have been part of the natural landscape since humans evolved on Earth. We have a deep, innate desire to be around them, even if you aren’t aware of it. What would our cities be like if we weren’t able to enjoy seeing a glimpse of greenery as we walk down the street? Would you prefer to see more grey than green? 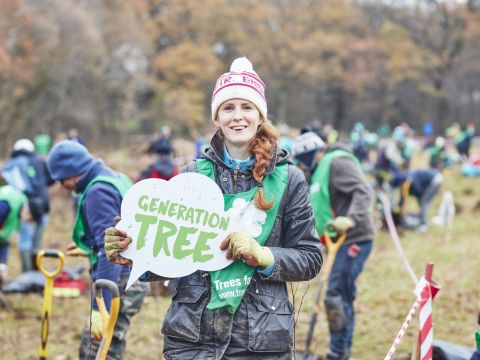 If you agree that we need more trees in our cities, join Generation Tree by donating £6 to plant an urban tree. Let’s be the generation that plant more trees than we cut down.