Trees bring real benefits to our cities, health and wellbeing.

The effects of climate change are already being felt. We’re experiencing warmer, wetter winters, and hotter, drier summers, creating higher temperatures in our cities. Climate change has caused an increase in pests and disease, which had never previously affected the UK. The impact has been an unprecedented threat to some iconic tree species, including ash, horse chestnut and oak.

By planting thousands of urban trees worldwide each year, Trees for Cities is building resilience against threats facing the natural environment. Planting a range of tree species enhances structural and functional diversity in woodlands and on city streets, as well as building resistance to pests and disease.

CHECK OUT SOME OF OUR PROJECTS

Tree cities of the world

We're proud to be part of the Tree Cities of the World programme, connecting cities around the world to create a network dedicated to sharing how we all manage urban trees and forests to make our cities greener and more robust. 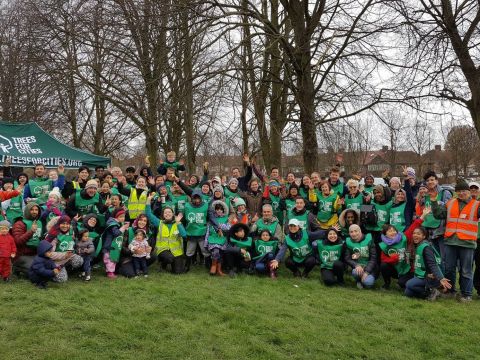 Since January 2018, Trees for Cities, Ealing Council and local residents have been working in partnership to improve the green spaces on Racecourse Estate.

Are you a local authority, CIC, charity or responsible for managing land in urban and peri-urban areas, preferably outside London? Trees for Cities are looking to support organisations' small to medium size planting schemes. Get in touch!